Parkinson's disease is a nervous system disorder that affects movemen, often including tremors. Symptoms start gradually, sometimes starting with a barely noticeable tremor in just one hand. Tremors are common, but the disorder also commonly causes stiffness or slowing of movement and loss of balance. Its affects the nerve cells or neurons in the brain that produce a brain chemical that is dopamine. It is degenerative disorder of the central nervous system that often impairs the sufferer’s motor skills and speech.

• Tremors: Involuntary trembling of the finger, hand and foot
• Cramped handwriting or other writing changes.
• Rigidity: Stiffness of the muscles
• Voice changes.
• Uncontrollable movements during sleep.
• Akinesia: Lack of movement or slowness in doing and maintaining movement
• Postural instability: Characteristic bending or flexion of the body, associated with difficulty in balance
• After diagnosis, treatments can help relieve symptoms.

• We aim to enable people with Parkinson’s disease to maintain their maximum level of mobility, activity and independence through the monitoring of their condition and the providing proper medical treatment.
• Rehabilitation of the patient is done with the help of education and support so that they gain functional ability, minimize further complications thereby improving the quality of future life 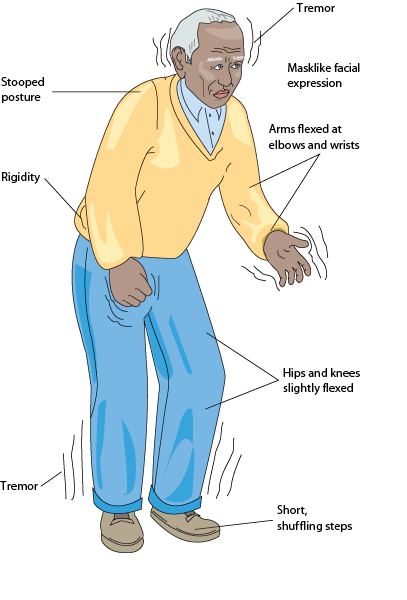