Cerebral palsy is a group of disorders that affect movement and muscle tone or posture. It is caused by damage that occurs to the immature brain as it develops, most often before birth. Signs and symptoms appear during infancy or preschool years.Cerebral palsy is a problem that affects muscle tone, movement, and motor skills. Celebral Palsy often is caused by brain damage that happens before or during a baby's birth, or during the first 3- to-5 years of a child's life.
• Poor head control
• Delays in motor development
• Difficulty feeding and sucking
• Lying in awkward positions
• Easily or frequently startled
• Delay in crawling, walking, pushing up on all fours
• Favoring of one hand over the other
• Abnormal crawling
• Spasticity that is abnormal stiffness and contraction of muscles
• Motor impairment that is difficulty with writing and other coordinated tasks
• Involuntary movements
• Slow overall development
• Difficulty with speech, hearing, or vision
• Difficulty with perception or sensation
• Inability to control bladder and bowels
• Breathing difficulties
• Seizures
• Behavioral and or attention deficit disorders,
• Impaired sense of touch or pain
• Swallowing problems
• Limited range of motion

Several tests can be used to assist in the diagnosis, and determine the severity of cerebral palsy.Intelligence tests often are administered to a child with Celebral Palsy to evaluate mental impairment.An electroencephalogram (EEG) traces electrical activity in the brain and can reveal patterns that suggest a seizure disorder.Imaging tests are helpful in diagnosing hydrocephalus, structural abnormalities, and tumors.Magnetic resonance imaging (MRI) uses a magnetic field and radio waves to create pictures of the internal structures of the brain. This study is performed on older children. It defines abnormalities of white matter and motor cortex more clearly than other methods. 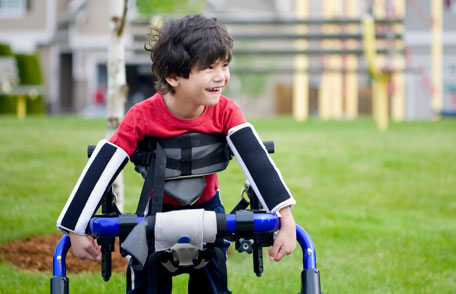